The 2019 Nebulas arrived at an interesting confluence of mundane reality — I was just coming off my Write Here, Write Now weekend in Baltimore, still dealing with bronchitis, and trying to change my contract to a new company so I could keep my current job (and applying for the same job as a full-time employee). It’s complicated.

Because I didn’t have any vacation time (the life of the contractor), I worked until the last minute, and picked up an early flight from Oakland to Burbank. However, what should have been a one-hour hop turned into something more due to unseasonable storm activity. The airline topped off the plane’s fuel in case we had to re-route, but the flight was overbooked, which meant they now had a very full, very heavy aircraft. The solution? Shunt the last-minute ticket purchasers (and their luggage) to another flight.

So I arrived later than I wanted, and took my carry-on to the shuttle to the hotel in Woodland Hills. Due to the nature of LA traffic, we used rough city streets rather than the freeway, and the driver had his phone set to squawk like a startled parrot every time he received a text.

He got a lot of texts.

My room wasn’t ready at the hotel, despite promises of early arrival, so I registered and picked up the bulging Bag o’ Books that comes with the conference. So many excellent and interesting things to read! I ended up storing my luggage (and my medication — oops) with the front desk because I had to meet up with my tour group for Space X.

Thanks to some local connections, the conference had organized a tour of SpaceX for some of the volunteers, and my name was picked. It meant a long drive through fabled LA traffic (which could have been much worse, to be honest) but we arrived with time to spare. (Unlike the second group, which took an Uber that apparently disagreed with Google Maps and got lost in a parking lot.)

You can’t take photos inside SpaceX, although they have one of their Falcon boosters in the parking lot for selfies. (Named after the Millenium Falcon. Of course.) 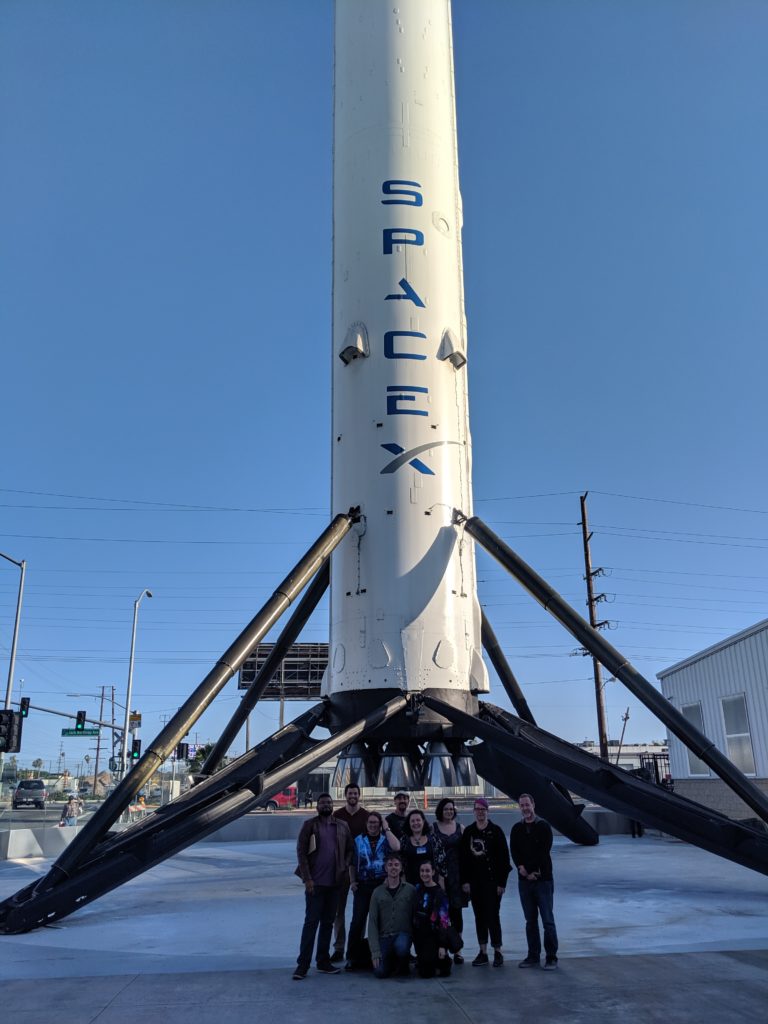 Inside the facility, there were fanciful travel posters for alien worlds, movie props (a suit from Iron Man 2) and more flat panels displays than a Las Vegas trade show.

There were also rockets. Engines, fairings, frameworks, nuts and bolts and strange valves, many of which were printed on site.

I was surprised that only a small portion of the shop floor was set aside as clean room space (for the Dragon capsules). Most of the heavy assembly took part in the open, much like the repair section of a high-end car dealership. The tour guide took us through a clearly delineated path, but you could literally reach out (past the safety rope) and touch an engine that might one day boost a satellite into orbit, or lift an astronaut to the ISS.

For me, SpaceX felt more like a big software company that also played with big hardware. The vibe was intense, but friendly, and there was a familiar tribal energy of We’re Doing The Cool Thing.

It wasn’t all geekery. The astronaut liaison related the story of her meeting with families of the test pilots. When one boy told her to “take care of his daddy” she recognized the heavy responsibility that she and the other employees shared. If they didn’t do their jobs well, people could die. It was sobering.

Elon Musk is doing some interesting projects in the world (tunnels? really?), but I truly hope that this venture succeeds. We really do need to get people off the planet, and it’s groups like this that are going to do it. Also, having cheaper worldwide internet service wouldn’t hurt.