Day 2 of the Nebula Weekend found me joining a host of brave volunteers for the second part of the Mentor Meetup. I was assigned two bright-eyed new writers and given 50 minutes to impart All The Wisdom. Poor kids. I opened the tap full blast, and between coughing fits, challenged them to attend a serious workshop (hello, Viable Paradise!), find tough beta readers, create a process, abandon the process, and overall keep the faith. This is art, dammit. No actual egos were harmed. I think.

I also sat in at the usual SFWA Business Meeting, which was much improved by the presence of Aliza Greenblatt, fellow VP16 alum and freaking Nebula-nominated person. (Sadly, she didn’t win, but I cannot believe this will be her only time on the ballot.)

For the afternoon, I caught a quick nap, hoping to quell my symptoms, and then did a couple of hours of KP duty in the Hospitality Suite, where I met more cool people and got to listen to John Scalzi’s philosophy on burritos (he’s a descriptivist, rather than a prescriptivist). He also confirmed the story of how he wrote The Consuming Fire in 2 weeks. Seriously.

Saturday was full of special writer goodness. I attended the interview with this year’s Grand Master recipient, William Gibson, who related some pretty funny stories about his brief time as a screenwriter, and the fact that his last novel had to be completely torn down and rebuilt due to the timeline disruption caused by the 2016 elections. Later that afternoon, I helped schlep camera gear for the official photographer (the great Richard Man), who used me as a proxy for Mr. Gibson so the Grand Master didn’t have to wait while lights were calibrated. Turns out he and I share a similar build and hairline, although he’s a tad taller.

My table at the Nebula Awards banquet ended up being relatively close to the stage, so I had a good view of the actual proceedings (although two excellent video screens provided full coverage). My table companions included another Viable Paradise alum (Aimee Picchi), a seasoned pro (Jeffrey A. Carver), and other volunteers, partners, and even a freshly minted writer who’d never attended any event before. Good on him. I don’t think I’d be that brave.

The awards featured a new category, game writing, which was very popular, and plenty of quality contenders for the usual fiction (short, novella, novelette, and novel). Happy to say that many works I read and enjoyed ended up on the ballot and a few of them even won.

I was too tired to attend any of the after parties, so retreated to my room for some light reading and much-needed sleep.

Sunday started off with a (slightly delayed) volunteer breakfast. This was Cat Rambo’s last year as SFWA’s President, and she graciously thanked us all for the continuing spirit of paying it forward. I got in a few more panels, including a thought-provoking discussion on gender and writing (with Futurescapes buddy Jordan Kurella), and listened with great amusement as several pros described their various personal writing habits and hacks. Some good ideas there.

My best friend Dan Malcor (with his new love, Cora) came up from Orange County to transport me back to the airport. Since we had a few hours, we decided to do a spontaneous trip to the Getty Museum. This branch of the museum wasn’t open when I last lived in Los Angeles, so it was a real treat. The weather was nearly perfect, and the view from the upper deck showed the Valley in all its springtime glory:

Due to the recent rains, the main gardens were closed, but the exhibits were open. We had a lovely time, and found this one example that we promptly dubbed, “Dude Christ”: 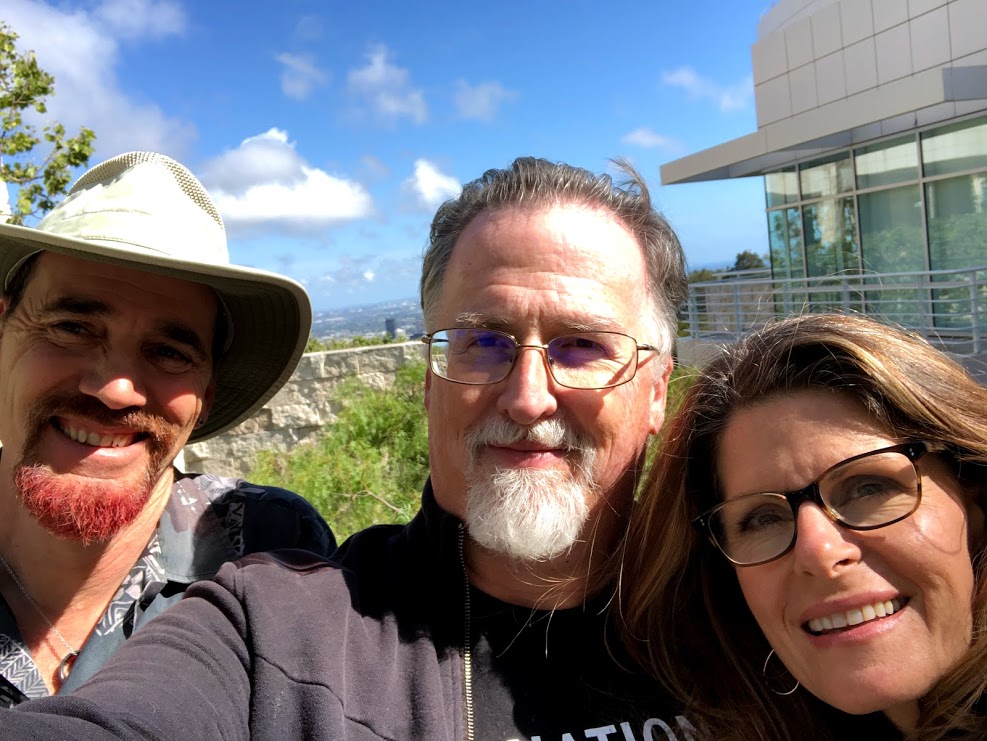 I get cultural with Dan and Cora

Eventually we had to trek back over the hills to Burbank, where a very late, very full flight brought me home. It’s a good thing I had upgraded my seating earlier, because even boarding early (in the rain!) I could barely manage to get my carry-on into the overhead bins. Very grateful the actual flight time was barely an hour.

Monday – ugh. Back at work, coughing. Less said, the better.

There were many other people I wish to thank for a great, affirming weekend, but I can’t remember them at the moment. You know who you are. I’ll buy you an absinthe next time we met.